Just a sample is never enough.


Just a sample is never enough. 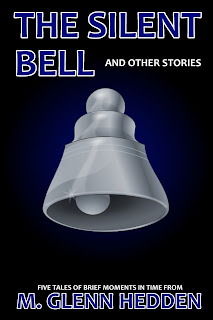 The Silent Bell and At the River’s Edge are just the first of the short stories which will make up the whole of M. Glenn Hedden’s work, The Silent Bell and Other Stories. The reads are short, but compelling little incites, which while a wee bit odd, in a cool way, I really rather enjoyed.


In The Silent Bell, Nemo, the voice of the tale waits in line for a Latte when a figure from his past falls into his view. Her name is Jenny and she is the proverbial “girl that got away.” Having heard about the girl from time to time over the years, Nemo is immediately at odds with whether he should reveal him self. Seeing her for the first time in more than fifteen years sends his mind into recounting his past with her.

From their first meeting at their seventh grade Music Camp, to the night of their first kiss. He recalls with guilty pleasure his mild corruption of her as they shared her first cigarette, how no one was the wiser as they dashed it away when their friends returned. In the course of a few moments, Nemo takes us wistfully through the course of the relationship, his tone going from fun to serious as it progresses before he sits down in front of her then....

I’ll not give you the rest; you’ll have to read it. J

As for At the River’s Edge, this one has a more surreal approach, for the first time I find myself at a loss for the right words, as I approach this piece. I hate to give anything away... I’ll give you this, there’s a talking cat, and a pink pterodactyl. Suffice to say, this read could be an interesting topic for debate in the classroom.

M. Glenn Hedden has a strong sense for the good use of Irony. Those with a head for Literary Fiction I suspect will gain much if he continues down the path that these two stories have lain.

Keep your eyes open, as The Silent Bell and Other Stories is slated for publication Fall of 2013.

Until then go on over and read my Interview with M. Glenn and do find him at the venue below and show some support for this rather talented up and coming Indy Author.