Not Your Average Boy 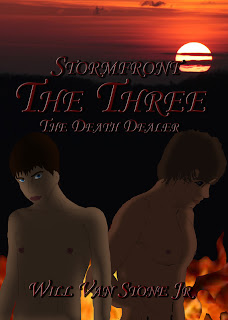 By: Will Van Stone Jr

The Three, is the first publication by Will Van Stone Jr under the STORMFRONT: umbrella. Tis short novella was a cover to cover read for me. I started it in the morning, and was so absorbed that I finished it before dinner time. I was kept on the edge of my seat, unsure where it would lead me next. Caution, though, from page one your heart will get pumping, and your stomach may often turn, as this is not for the faint of heart...


The tale follows the exploits of one Dylan Jacob Bradshaw. Orphaned at the age of 10, he is taken into The Order of the Three, specifically the Psi-Ward extension, due to his telekinetic abilities. The Order operates in secret to the general public and outside of any government control. Dylan is the youngest assassin in The Order, and his marks are often those who have a taste for young boys. While it is not the most favorable of situations, the results Dylan produces can not be denied. He is most certainly my new favorite tragic hero, with a drive and ambition of his own. He takes the jobs given to him, adding to his body count all on the promise that one day he will be brought face to face with those who murdered his parents. This is his goal, as is the protection of his dear friend and partner in death, the technologically savvy Agent Cody Markus, who is his eyes and ears on the job all while being kept at a safe distance.

That is until they are asked to infiltrate the BoyHeart Convention, a pediophillic wet dream, being held in a Hotel owned by one of them, in a town where discretion is an understatement. The Order received the silent contract with the condition that Agent Bradshaw was to carry it out. Dylan's first instinct is to refuse, but Cody has already signed on, thus Dylan takes the contract, learning disturbing secrets from Cody in the process. Dylan is torn between the job and keeping Cody from having to relive a past better kept buried, but Cody is there for justice and Dylan is his sword.... The contract was for 15, but by the time Dylan escapes the Hotel, he has brutally tortured and murdered 122 deserving fucktards. This over reach with in the Order carries a death sentence, but his title as Death Dealer saves him, but his life as an assassin is forever shattered.
Not gone from the Order's walls a single night, Dylan, although allowed to keep his living arrangement with Cody's family, is at once lost and confused, then a disembodied voice sends a warning. "Three come for you. Be Prepared."
The Three, thought to be a myth, by all except Dylan who until his discharge was actually one of them, are the top assassins, the best of The Order, unrelenting, unfeeling and unstoppable. Rather than risk the lives of the Markus family Dylan ventures out to put pavement between them, until he remembers Cody. He goes back, and finds that his best friend has been taken, it's a trap, he knows it, Cody's family knows it, but Dylan can not leave the one innocent in all of this...

You'll have to read it for yourself to see what is in store for him in the next chapter of his adventure. The villains, while plentiful, each have their own personality and none repeated, you know that the characters are separate, each having quirks, actions and backgrounds no matter how minor the character may have at first seemed.
Personally, I love that nothing is simply thrown in, everything has a purpose and reason, there are few authors who put that much thought into all of their characters. I would Highly recommend this book to anyone looking to be engulfed by a new serial.
And Keep your eyes peeled for Orphan, the next installment of STORMFRONT: Until then, don't miss my candid Interview with Will and do check him out at the avenues below! Until next week My dear readers of the wee hours...