The 131 Preview Review Presents:
Diary of A Vampire Stripper By: +Cinsearae S.

Okay, I won’t tell you not to laugh, when I first saw the title, I gave a hearty chuckle, and was instantly reminded of Jenna Jameson’s Zombie Strippers!  Which I recommend if you have a love of REALLY Bad films.  Anyway, as my last few 131 Previews were, well... more.... Serious, I was in the mood for something... Not.
Boy did I find it... 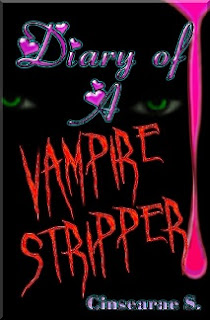 Trying to keep her head above water, eke out a life for herself, and pay her college tuition, Audra Perez, decides as a goof that stripping may be the way to go. She dons the persona of Claudia, (admitting from the start, to ripping it from her love of Interview with the Vampire),  and shakes her ass for the crowd at the Hoochie Coochie Club, never expecting to actually get the job. But fate has away of messing with this girl, as she reminds us time and again.

Her man troubles all start and end with Darren...

The older man sets her long neglected body aflame, after an erotically charged meeting in a private room of the club leaves her aching for more, she starts dating him, against her better judgments and the rules of the club. He wines her, dines her, and eventually takes her on a weekend trip, where she gets more than she bargained. Their long awaited and particularly heated coitus ends in her waking up with a penchant for... Blood.
After munching down on a Seagull, the smart girl puts two and two together, and as if waking up a vampire wasn’t bad enough, Darren is gone. Leaving her with a note telling her he can’t be there just now, that it would be safer if she were to live life as usual. Oh and I forgot to mention there’s 20 grand in the envelope.  (Consolation Prize perhaps? Or maybe just a thanks for the uber nookie?)

To say she is irate, is an understatement, and although she hates Darren for abandoning her, she aches for him just the same. Immediately she decides humans are not to be on the menu, but Audra’s reasoning for not wanting to drink Human blood is aesthetic, and rational, rather than moral.
I found this refreshing, as usually it’s all about not wanting to take a human life, blah, blah, blah. But for Audra, it was simple and clean cut;

“People were way germier than animals.”

And besides, what would she do with the bodies? (A wood chipper maybe?) :P
Instead, she feeds on Pigeons, but they don’t keep in the fridge all that well, so she starts freezing their blood, ingeniously adding the cubes to little bottles of tomato juice that she keeps stashed in her purse. With the blood problem solved she switches to night classes, and goes back to work. All the while hoping that Darren will come back to her, for her.

Just as she is getting used to life without Darren, enter Paul. A tallboy, (6’4) with a puppy crush, who after much stuttering and panting after Audra finally manages to get the a private show where Audra discovers that he is indeed a big boy, when she gives him a “pity” hand job and he proceeds to let loose like Jason Bigg’s in American Pie.

It’s a trip even if a little gross. But I like dick and fart jokes, so sue me!

Speaking of fart jokes...  Paul is sweet to her, but he has the worst case of flatulence, (which he lets rip after she leaves the room.) I have read or heard about in forever! She sees him as a regular, and always the farts! Oh GOD! And it only gets worse when she takes him on, all of him, for some X-rated fun.
Finding that she has to teach him the ropes, as his experience is sorely lacking. The only girl he’d been with unable to handle the explosions from his rear, (The poor sap.) The encounter pushes her hunger over the edge, causing her to take a sample from the vein in his thick throat.

But even as oddly good as the sex was, soon Audra finds she can not deal with him as a  constant, the bite forming a bond between them, so she has to actually charm him to leave her alone.  Then it’s back to work at the Hoochie Coochie Club, where her only line to sanity is the raunchy and feisty Lucinda. Another stripper in the joint who she lovingly and secretly calls Ms. H.C. (Hairy Crotch), you get an awesome visual account early on by Audra who likens it to a tarantula! I was rolling!! Anyhow. Again it all seems good and fine, but troublesome men keep popping in to her life.

(If I had her luck I’d seriously be considering permanent lesbianism.)

Now she’s faced with Josh, a cantankerous and exceptionally rude son of a bitch, who after going out with him at Lu’s behest, turns out to have been stalking her. He knows her secret, and wants her to turn him.
Lucinda tells her to kill the bastard, (I whole-heartedly agree) but Audra doesn't want to make waves, see his daddy is a cop.... Was a cop, now... he’s worm food, at least what’s left of him.

After finding out that she has gotten herself in with yet another unstable guy, Audra is faced with even more insanity, when she finds out that Lucinda is a Werewolf, and that her family is on Josh’s father’s hit list. The man is ringleader to a group of “radical” cops who hunt them, and any other monsters they can find.
Lucinda is fun and an informational wonder, as she tells Audra that she is in fact considered to be the infamous Darren Von Eldon’s wife and that Lu’s Werewolf family will not be pleased. The two clans have been fighting over territory for centuries.

Until next time, dear readers of the Wee Hours. Be sure to click below to peruse the arenas where you can find more from Author Cinsearae S. And as always click here to be taken to my Post Review Interview to learn more about this fun, dark and dynamic Author!