A Psychological Turn of Pages 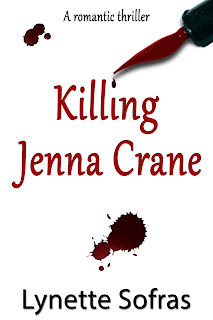 Firstly, before I start my Preview Review I need to say that this has been a pleasure to read and I will surely be picking it up so that I can finish it in the future.
Killing Jenna Crane, is a Psychological Thriller/Suspense novel that seems to live up to its genera without being obvious. It will appeal to a wider breadth of readers. After reading the first 131 pages I am hooked and have requested the next 131!


All in all the novel is exquisitely well executed and grammatically sound. It draws you in and many of Author Lynette Sofras’ descriptions are just spot on. Lyn paints the scenes with beautiful turns like

The visuals and conversations are poignant, and yet they don’t reach the point of making ones eyes roll due to over extravagance or length.

The tale is about Ellis Crawford, the English Author of a series of novels featuring Jenna Crane, a no-nonsense ass kicker of a detective so popular that Hollywood bought the rights and it has become a franchise in the United States.
From the word Go! Ellis seems to be a bit of a... Well let’s put it bluntly,

Ellis seems to dislike everyone except his “beloved Jenna Crane.” The only problem is that up to this point we don’t know Why. It seems as though it is simply a personality flaw, but even flaws have a reasoning, thus far it is lacking those reasons, which kept me turning page after page.
The man is at the end of his rope with the series, having grown bored and disconnected from the work. The tale follows him through the length of a year, bouncing around from past to present, in a skillful way, which does not distract the from the novels over all flow.

Reeling from a failed relationship with a neighbour named Chloe, which left him a wee bit raw, he often reflects on the nature of the relationship. Which began because of Mr Minniver...
Chloe’s cat.
If he hadn't gone missing the two would never have gotten started.

Chloe is endearing, her worries of Mr. Minniver being catnapped, are just too cute to ignore. Of course she would be a HUGE Jenna Crane Fan. Once Ellis finds the dammedable cat, she not so gently, yet unobtrusively wiggles her way into the writer’s life. While it should be noted that her actions are stalker-ish, it comes across more endearing, she is at once doting, caring, easily moved and very likable.

Unfortunately Ellis’ actions towards her prove to paint him as rather unlikable. It is hard to feel anything for him other than he’s getting what he deserves and let’s face it, Jenna has more of a backbone than he does.
Working sporadically on the latest Jenna Crane film, and still reflecting on the Chloe conundrum, Ellis meets Emily Madison, a “Locations Locator” whose beauty and general demeanor immediately render him utterly smitten. She is everything Chloe is not, especially when it comes to her opinion of Jenna Crane.

Emily manages to put the seeds of destruction in Ellis’ feeble brain, urging him to kill off the multi-million Dollar Action Star, for what can only be described as petty jealousy.

But it is not all Wine And Roses for them. Where Chloe had been a loving and affectionate woman, Emily is aloof and often as detached from Ellis as he had ever been from  the previous girl. Ellis is slowly seeming to be becoming unhinged. Racing and jarring thoughts fill his hours. He is beginning to believe that this love of his life, is running around, and treating him as he had once treated the awfully scorned Chloe.

At this point he can not write, only obsess about Emily, Chloe and the end of Jenna Crane... And what’s more, now he is seeking proof that Emily may be stepping out...

Something’s gone Rotten in the UK, but you’ll have to read it to find out just how much more twisted this little tale gets.

Until next time, dear readers of the Wee hours.... Take a gander at the other places you can find Lynette and her works. And click here to be taken to The 131 Preview Review Interview.