The 131 Preview Review takes a double gainer into Speculative Fiction: with Going Thru Hell from Author T.J. Loveless 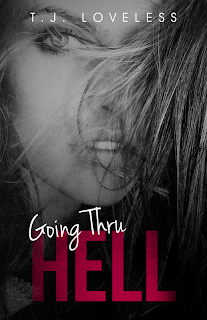 The journey through hell begins with one step.

Kylie sees actions and consequences as bright, shining timelines in her head. Born with the power to gather the strings and braid them into a new chain of events, she is the weapon of choice for many pantheons in their never ending wars. But using the ability requires fuel, and for a mortal, it means a piece of her soul.

Well kiddies it seems like it's taken me forever to get back to you all... I've missed you! I hope everyone had a very happy Holiday Season!! To ring in 2014 I've got a doozie of a tale!!

Today's great read is from Author T.J.Loveless  and is titled Going Thru Hell it is Speculative Fiction, which means it's time to don our thinking caps people!! While it has it's moments of lighthearted laughter and quite a bit of spicy sexual tension it is at it's core a tale of a Mother's Love, and to what ends one very special mother will go to ensure her child's safety.

Admittedly the read did not pull me in from the start, I'm used to having an author lay it out for me in the opening sequences. I need to know what's going on and to what end, typically from the start. If I don't get that for the better part of the opening I will usually put a read down. I did put it down, initially. But this is a 131 Preview Review, and I've as of yet never not finished a title I said I would review. I wasn't going to stop now. So After a bit of a push i broke through the first few chapters and then....

Suddenly I was hooked. Not knowing where the tale was leading me became the driving reason for me to turn the page again and again. Kylie is fascinating in that she yearns to lead a boring life. But her ability to pull at the strings of time makes her a much sought after commodity for the array of Gods which have been at war forever . What's worse is that the wars are now spilling out into the mortal world for all to see.

Just as she is ready to give up and give in, a new allay emerges the fallen Valkyrie  Brunhilde, lovingly dubbed Bru by our forsaken hero. Her goal in fining Kylie is to keep her safe, and try to repair the damage of the braiding. The two for a bond tighter than sisters, both emotionally and spiritually. But the Gods are far from finished with her. And another searches her out... Aki. He is a Berserker, he is stunning and he is Immortal.... Having stolen his immortality from the Gods, he has waited for a millennium, for Kylie to appear and fulfill a prophecy which binds them.

This poor unfortunate girl is pulled through the world and the realms. From Nashville, to the heights of Mount Olympus she proceeds to hand the mighty Zeus his ass on a stick, in the pyramids of Giza the black dragon Goddess Tiamat pulls her from certain death. All of this because the Gods want to force her to choose a pantheon and will them to win the wars.

To evade the outcomes of her kidnapping at the hands of the vengeful Artemis and Thor she must braid. Taking the strands of time, rearranging them so that she might change the outcome of her own destiny. She fights for her very soul, as each braid will cost her exactly that. A piece of that which makes her human....

You really need to get on the train here with me, and check this out, I was so compelled and in need to see where it was going that I went ahead and asked for the rest of the pages!! So you know it was good!! Check out author T.J. Loveless at the venues below and watch for my next review of her hilarious work Lucky Number Six, next week!!

Until then Happy Reading!!