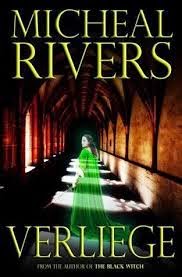 Verliege, a chilling paranormal and international crime mystery, begins at Arlette Mansion in the mountains of West Virginia. Prisoner and author Adrian Bolt was transferred there accused of the horrific murder of his wife. She was found brutally murdered by an antique sword. His conviction by a German court was as swift as the sword that killed her. Adrian had not spoken since her death …until… Dr. James Pellitere was able to break his silence.

A deal was offered to Pellitere. Traveling to Germany with a paranormal investigative team they searched for evidence that would clear Adrian and prove him innocent. While at the castle, Pellitere is confronted by the supernatural residents. A battle begins over the secret of the nine and a prophecy is in jeopardy of becoming unfulfilled

I'm not prone to reading ghost stories, but Michael's premise intrigued me. The tale unfolds from the mysteriously built Arlette Mansion, built to those those whose crimes were worthy of prison, but whose money could buy them a more comfortable place than the typical concrete cell block. Adrian Bolt, I love this name by the way, is at once a hypnotic and auspicious character. Having not spoken to anyone since his wife's demise. So his motives for opening up to the Doctor, James Pellitere is immediately called into question by me.

Adrian tells a tale of spirits converging on his home in the castle of  Verlige. Taking to talking to them he and his wife are instantly victims as well as friends to some of them. His wife even going so far as to seem to be in a romantic relationship with one! The ligistics of that boggles the mind!!

James listens intently to Adrian's telling of the goings on in the castle. Tales of murder and intrigue at the hands of the ghosts themselves. Some while they were alive and others fro beyond the grave. Adrian puts it to James to go and prove the tales he has told and James takes himself to Germany to do just that.

This is when things really get weird. But I'm not going to give the story away. you need to read it for yourself. The images and the characters are well written and instantly transport you back to a world that is rich, and filled with betrayal and copious amounts of murder.

Go ahead give it a try. I dare you!