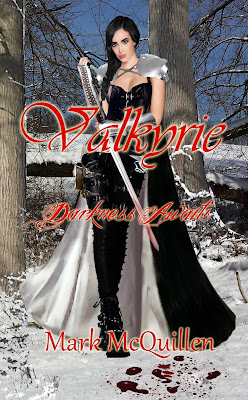 Gil Swanson has been battling PTSD for years from his years of combat and his lost comrades. While on a research trip to Gettysburg he runs into Mist, a mysterious woman from his past who is in reality a Valkyrie. Answering her plea for help Gil finds himself involved in an ancient blood feud between the darkest powers and the desperate warriors of the light.

Firstly can I just say, that this is a Debut novel for Mark McQuillen, and he's nailing it! A RPG veteran and DM for over 20 years and it shows. He can tell a tale and wrap you up in it with force. From the word go, our tormented Gil Swanson is swept up into a world that he seemed to know lay just under the surface. Experiences long forgotten preparing him for a battle to save a world he didn't know needed him, but that once he is thrust with in, he wants desperately to be a part of.

The Valkyrie Mist, is beautiful, intelligent and fierce. Written with a strong will and yet a softer side that keeps her believable, as a warrior and as a woman. Her Sister Valkyrie and the surrounding Goddess players in the tale, are also exquisitely written. This is a man who actually has done his homework on his subjects.

It's nice to see a fantasy with intelligence, humor and a modern twist even as the old Norse mythology runs rampant. We see some old favorites, Freya, Skuld, and Loki to name a few. If you know your Norse these names are familiar. Gil is called upon to retrieve Thor's  Hammer, but soon learns that there is far more going on than a simple snatch and dash.

An ancient Evil has been terrorizing the people of Asgard and is threatening to spillover into Midigard  if it is not stopped.  There are prophecies which foretell the coming of a man to save them. The question at my cut off is can Gil be that man? I'm not telling... Go read this awesome tale, and keep you're eyes peeled for the  continuation!!

I was born in 1958 at Malestrom AFB in Great Fall's Mt. So I was raised in a military family. I was keenly aware of what PTSD can do to family and friends. I kept that in mind when writing the book. Gil Swanson is a combination if things, my father, friends and people I served with in my own stint in the military.
Mist and Sif, the co- heroines are based on the classical Valkyries but in the process of writing them. I was inspired by Wonder Woman, the Aes Sedai of Robert Jordan.
I'm still on the journey and I look forward to have you all come with me.

And remember: "Be careful of what you say and do in life, you never know who's watching."