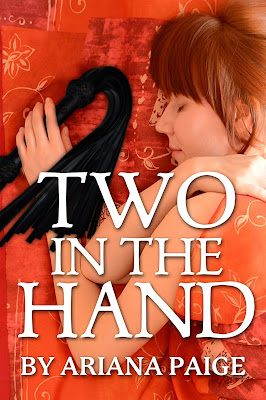 As an experienced Domme, Mistress Lisa is a damn tough cookie, at least on the outside. On the inside, she misses having a submissive boy by her side.
A bar bet with an alpha male turns into something more, far more than she expected. After introducing Ryan to BDSM, she discovers his curiosity for submission and just how much humiliation and pain turn him on. Could this younger businessman be the new boy she is seeking?
Lisa seeks to steer Ryan's lust and desire towards her younger friend. Melinda hasn't yet discovered the dominant woman lurking inside herself. Her own desire for Mistress Lisa and her own love for tasting the whip hold her back.
What is a dominant to do with two willing and eager toys begging for her attention? Turn one of them loose, turn them on each other, or keep both of their leashes firmly in her hand?
Two in the Hand is a dynamic exploration of female domination and a glimpse into the life of a Domme. The book delves into D/s relationships, BDSM, humiliation, cuckoldry, CBT, orgasm control, bisexuality, masculinity, and of course plenty of intense scenes between consenting adults.
Ariana Paige is a lifestyle dominant and professional writer. She is the author of five-star reviewed The Houseboy, a story about a woman discovering her own inner desire to hurt and control a willing man. Her other ebook, With Lustful Intent, is the tale of a small-town girl gone very wrong and the depths she is willing to go to get the man she wants.

Well if that ain't enough to intrigue the first three pages had me hooked!

What can I say except this in NOT YOUR TYPICAL 50SOG Bullshit. From the first chapter author Ariana Paige sets you up to know that Mistress Lisa is not to be toyed with. She sets them up and knocks them down from the word GO!

Mistress Lisa is at once intrigued by this seemingly tightly laced boy who took a thwak to the nuts like a champ and asked for more. Ryan the younger man to Lisa's cougar is a smart ass that quickly begins to learn his place as he attempts to pursue her, their first "date" making it hard for me to ever look at a Mango milkshake again without a grin.

Having gone sometime without a serious playmate Lisa sets herself up to training Ryan, while still playing with Melinda. The session between the two women is intense and  red hot, putting you inside the headspace of the Domme in a way most do not.

Seeing this side you can tell that the author has spent time developing her particular skill set, and that of her characters.

It's an excellent if short read, but well worth the time. I certainly plan to take on more from Ariana Paige and I think you should too.

Keep your eyes out for  my interview next week! IN the mean time do check out her links and her other work!