The Moon Calls For Love Bites and Clawed Fights


"Their kiss victimized passion and made the sheer meaning of it beg for a new definition." Eri Nelson, Heated Calls From Change. 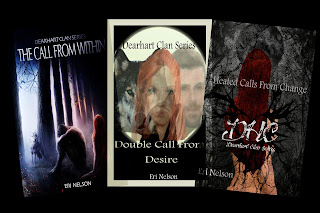 This statement is the embodiment that is becoming the Dearhart Clan Series.

The Call From Within: At first glance, I readied myself for what I thought was going to be yet another venture into Twilight-like romance gag-fiction. I had resolved myself to reading it, and being honest and polite, having taken a strong stance against the sparkly vampires and their pseudo sexual furry werewolves.

After the first chapter, I found myself pleasantly surprised that my first impression was in fact very wrong.


The tale may be short topping off at a mere sixty-eight pages, but what it lacks in length is made up with (pardon the well intended pun), heart. We meet Owen Dearhart, the Alpha male and only hope for a Wyoming pack of Werewolves who are on the brink of extinction. Females are scarce, and can not simply be made; they must be born, and claimed, the problem... Most females did not survive the trauma of the Moons Call.

Enter a tight bodied waitress named Kristen and the fur begins to fly, literally. The imprint has been made and now a race has begun, Owen must bed the fiery haired maiden, and awaken the Werewolf within her, before she turns 24. With only days left they must escape Brinston, a Shapeshifter who has staked his claim for Kristen, as in the shadows beyond the chaos, a traitor stalks, his werewolf jaws salivating for revenge against his maker.

From “The Call From Within” to the latest work “Heated Calls From Change,” Eri Nelson's Dearhart Clan series has proved to be something to be thoroughly savored. I suspect it will become something you will reach for over and over again.

The story builds as does the tensions, from the first page to the last. To read Eri's work is to see the werewolf in a new light. They are passionate, full of yearning, and driven by a desire that even the moon's call can not satiate.

In the first book, we found Owen and Kristen who embraced their mating with fervor that rivaled the most lustful of love tales. Owen fought the Shapeshifter horde's to keep her, while a traitor to the Dearhart clan, Wash awaited to exact this revenge for being made a Werewolf.
In the second book, the heat and tension grows as Wash jumps to push his vengeance to fruition by taking Kristen as his captive. Owen begins to suspect that his mating may have been planned and Thomas fights to deny the feelings he holds for the newly bedded Julia, thus suffering the pain of the unfurling for resisting the Moon’s demand.

In the newest work, a prophecy is unveiled which unknowingly Bry, (a decidedly Celtic Werewolf of the Dearhart Clan, a as I have interpreted it), has a hand in setting into motion when he claims the Shapeshifter/Werewolf hybrid Karina as his lover. This flaxen haired beauty threatens to consume him body and soul, both thrown in to the throes of their desires as they run from the now blood thirsty pack. Thomas finds that although he still fights with his imprint to Julia he oddly wants the thrust of their immediate and impending parenthood. While Kristen and Owen newly reunited must face the governments most seasoned pro and a new horde of Shapeshifters.

Destines have begun to intertwine, and I readily wait to find out how it all pans out. Find Eri and all of her works below and tell her Shannon sent you! And don't miss our Interview here!

​Cheers and Happy Reading!
﻿
Book Trailer for the DHC Series