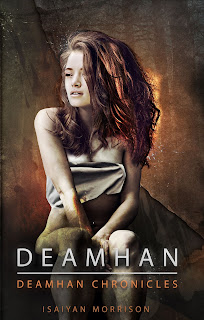 Deamhan have survived by remaining hidden in the shadows. Ramanga, Lamia, Metusba, and Lugat have been overshadowed by what humans know as the modern vampire. But what if vampires aren’t the real threat?One woman’s search for her mother who disappeared without a trace on the streets of Minneapolis takes her into the precarious world of Deamhan, psychic vampires who rule the underground nightlife in the city’s most darkest corners.She gains the trust of the only other human familiar with the Deamhan lifestyle. With his help she finds not only can the Deamhan not be trusted but it s her own father, president of a ruthless organization of researchers, who has diabolically maintained that distrust.

Let's start off with a trailer...


Still not convinced? Read on...


The Deamhan Chronicles is not your average Vampire Novel.In fact it's not really a Vampire Novel at all. See the Deamhan are something different. Yes they need us to survive and they can die in similar ways to vampires, but they are a race unto themselves.

As the story begins a woman,one Caroline Austin is running for her life only to be scooped up by Lucius a Deamhan who has put orders out for her protection. Together they disappear into the night.

Fast forward about 20 years and now Veronica Austin, Caroline's adult daughter is looking for answers. After her mother's vanishing her father seemed to try and erase all signs of her. Every scrap of clothing, jewelry photo, you name it he hucked it. No one from his organization (TheBrotherhood ) would talk about what happened and Veronica having had enough is now on a mission to find out just what happened to dear old mom.

At first I was expecting the  tale to have very strong Ricean ties, as the Brotherhood made me think of the Talamasca from Anne Rice's Vampire Books. But as I kept reading I found them to be far more secular, hidden and deceitful.  Getting involved where they should have kept their asses out of the way.

Any how, Veronica carts her ass to Minneapolis, the place her mother vanished from, and she had grown up for a time.  With the aid of her BFF Sean, who steals information from the brotherhood to further her cause, she lands herself in a hot bed of Deamhan and vampire activity.

A club run by a vampire, so both species have a place to feed on hapless humans.
And when the feeding ranges from heavy petting to torture, you know privacy is a must!

She is immediately spotted and pegged as a researcher for the Brotherhood, and though she truthfully and readily denies it, A Deamhan named Remy and a Vampire called Alexis take great joy in teasing and scaring the living shit out of our would be heroine. (the species are purported to hate each other to the point of violence!) Alexis wants to eat her while Remy wants to Play with her.... And then probably eat her...  in more ways than one...

The tension between these three is really rather good, as it occurs several times,with increased intensity. The club scene is certainly written from the POV of one who once had a hand in it's lifeline. The Atmosphere is so thick I could feel the thump and hiss of the Industrial house music!

While trying to keep her blood and energy safe from the Immortals infesting the city Veronica stumbles upon a rumors of what appears to be a brewing power struggle between the Deamhan Clans, now even as she tries to find her answers more questions have blocked her path. With the help of Sean, Murphy, Remy (Love quadrangle?) and a vampire or two, each with their own agendas Veronica must wade through the dark and blood soaked underworld... I think she should be careful what she wishes for... Cuz she just might get it...

Over all I am enjoying the tale, and look froward to more from Ms. Morrison.

Don't our interview! And do check out Isaiyan Morrison's other venues below!!

Until next time my readers of the wee hours!