A Twisted Interview with Eri Nelson from #The131PreviewReview 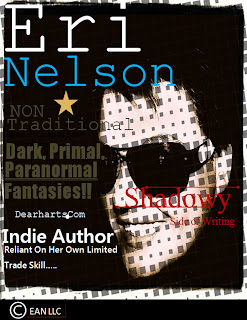 Eri Nelson born Erica Walcott is a Indie Author and the youngest of three in a family of five. Erica became Eri (airy) from her mother who called her that for as long as she could remember. The short take on her name took on a more solid base with the love of her life and husband, Jeff Nelson.
Together they have been for the past twenty years. Within that time they were able to raise one daughter and endless amount of pets.


Eri, welcome Back to the 131 Preview Review! It's been awhile.. LOL

Eri: Hi and thank you for having me back. (She smiles all bright eye.)

Glad to have you, so we return with The Scent Of Power the sequel to Destiny Repeats Twice, (The Isabella (Izzy) Tulley & Aiden Black Series) I have to say, WOW.

Eri: (She giggles) I will take the wow as a compliment.

Well you know I'm a fan, and it certainly is a complement.

Eri: Everything that comes from you on my work is taken with glee I assure you.

Hehe! The title of the work (The Scent Of Power) it eludes to one of the many powers your Heroine Izzy possesses, what gave you the idea to go with such a primal gift?

Eri: (She laughs) Well if there is anyone who knows of my other work, such as the DHC series then they will get that I typically write very primal. Therefore after Destiny Repeats Twice and three books now into the DHC it was a natural escalation for the Scent Of Power to take.

Indeed, and this tale takes on a darker tone, where you introduce us to what you have termed The Cursed. Would you like to tell us how they evolved in your head for the tale?

Eri:(She smirks) Oh wanting to get into my head, there is a dangerous train of conversation. (She winks)

*Giant Smile* It's high time we walk that labyrinth... I think we're ready for it!

Eri: (She laughs)
As you may know the Isabella (Izzy) Tulley & Aiden Black Series is my twist to mythology.
Emi or Empusae is an actual creature in mythology. One that bared enough of a likeness for me to play with a particular twist to the Vampire phenomena.

A dark and bloody twist indeed

Emi is as beautiful as she is deadly and her thirst is quite unmatched, would you mind telling a bit as to how they differ from the *typical vampire?
Without giving too much away of course

Eri: But seriously, they are bred very differently. Emi has a particular thirst that comes from her own (she pauses) kind and it because of the God element not any vampire legend, without giving to much away (she winks) that makes a very vast difference.

Eri: Thank you (she smiles).

Throughout the tale you make dramatic use of the corporeal undead, but made long strides to stay away from the *zombie niche, what made you want to incorporate such a striking visual of the horde?

Eri: An interesting question and I am glad you picked up on that. I had one beta reader that did differentiate the difference. (Eri nods impressed)

Eri: (she laughs)
Well since one of my characters uses the undead as a tool to their trade it did not make sense nor did it seem prudent to use them as typical zombies.
I love adding a touch of bloody and gore but in all honesty I am not a horror writer so my use of the walking dead was to give the eeriness to one particular character and her depths to use them.

Such depths we shall soon see... Bwahahaha!

While reading The Scent Of Power, I found one particular character to be very... interesting, given that it was an inanimate object. The grimoire. It was a rather ingenious twist to give it purpose. How did you come to doing that?

Eri: In all honesty the Grimoire came as I continue to write. Something in my head just liked the fact that the Grimoire could remember the hands that touched it. And it added to Meg's guilt. (She smirks at her hinting spoiler)

Oh, a guilty pleasure, the spoiler elusion!
I understand that the tale is not done for Izzy and Aiden, that in fact it is really starting to pick up in this one, and a third is on the far horizon, will this be a trilogy or a true series with a line of awesome reads?

Eri: Ok I am loving the awesome in relations to my work (she laughs)
Izzy and Aiden will be a series. I am a true fan of Izzy and it would be very hard press of me to not continue writing for her.

I know that to have you tell us anything about the third book would be a huge spoiler so I won't ask... But what will the title of the third be?

Eri: This I can tell you because I leak a bit of the next book into The Scent Of Power in the form a peek into chapter one.
Revenge Served Better By Blood will be the third book in the Isabella (Izzy) Tulley & Aiden Black Series.

Eri: Thank you.... I thought it suit the next Izzy mission. (She smirks)

An Izzy mission.. Yeah, I like that...
Thank you so much for taking the time to chat with us we look forward to your next twisted tale!

Eri: Thank you (she smiles), it has been a privilege.

The privilege is all mine! As always Readers of the Wee hours I urge you to follow Eri in any and all of her venues below and if you like us here at the 131 Preview Review do follow us or subscribe and never miss a single tasty morsel!