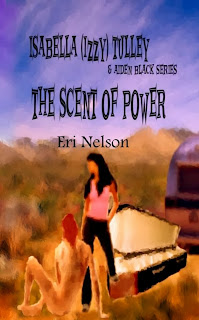 Eri Nelson is a nontraditional indie author who manages all areas of her fiction, fantasy, paranormal, action, adventure and sometimes-erotic writing.
Eri handles all the groundwork of her books, even the editing. Because of this Eri strives to improve her abilities along with trying to explain to readers her far from traditional sentence structures.
However, she will openly admit that typos follow her. Join Eri and her shadowy side of writing as she takes you along to explore new desire hunger filled worlds where your mind can share in the heat of the read.

The Scent of Power... Well after reading it all the way through, my first words to this phenomenal author were and I quote... "You Bitch!" Followed by a long bit of laughter.  Apparently this was the exact reaction she was hoping for from me. And well readers of the wee hours I'm not the type of girl to disappoint!

This book is a direct sequel to  Destiny Repeats Twice,  which was reviewed here at the 131 P&R a few short weeks ago. Eri is pumping them out like hotcakes over an open flame, and I'm sharing them as fast as I can get my hands on them! Good mythology is hard to find but her ways of twisting and folding the Greek Pantheon never cease to amaze and tickle my fancy.

Okay, I'm done rambling... I'm gonna tell you how I found the book, just as soon as you finish looking at the fucking sick trailer below!!


I'm making this a wee shorter than my usual rants, but only because if you have not had the opportunity to read Destiny Repeats Twice I don't want to Spoil it for you! See I'm doing the vague thing as a service to all you awesome readers out there who have yet to experience the twisted Mythos that is the world of Author +Eri Nelson...

The Scent of Power takes us from Izzy's trailer to The Realm of the Gods, the place on high from which they produce their worst mischief. Now the Goddess Hecate has gotten her hands into the mix, just as one of her most formidable and dangerous children Emi has unleashed The Cursed upon Izzy's little family.  Emi's goal? An Isabella Tulley Salad, topped with Aiden Black Sauce...

To make matters worse, those closest to Izzy are keeping secrets that may mean the difference between saving and irreparably destroying her world, not to mention ours.

With little to go on, except the cryptic demands from the mouth of a risen corpse sent by Hecate,  (yep we got's lots o' rotting flesh) Izzy, the Demi God Arnost and Meg, (Izzy's sister/goddess of memory) they capture the sly and vivacious Tempest, a member of The Cursed  who hates his creator Emi, more than being locked in a gun cabinet.

(Read it and you'll understand... LOL)

Death looms in all it's stinking and putrid glory as Izzy is in a race against time to save our Aiden from the wanton blood lust of his captors. You'll have to read it to find the best Thriller moment of all time. IMO. SO move you're asses and pick up The Scent Of Power from Eri Nelson.

Don't miss our Interview here; and be sure to check Eri out at all of her venues below...