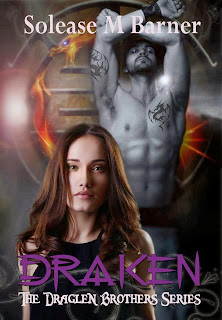 Cess Lamil is determined to get her college degree with honors and start her career. When the new neighbors moves in down the street, her plans change quickly. Draken, the controlling and obnoxious neighbor, is all she can think about. Despite her initial dislike, Cess feels strangely drawn to the mysterious, handsome Draken, but she soon learns that Draken has dark secrets.

Draken Draglen is in town to get the family business in order. He lives by one rule: only sleep with women of his own kind. When Cess walks down the street to introduce herself, Draken fears he is going to break his rule. He is determined to stay away from her, fearing his dark secret may be revealed, but his need for Cess is too strong. Draken makes a decision that could change not only his life, but that of his family as well.

The 131 Preview Review is pleased to present something new from Author Solease M. Barner. If you enjoyed the pulse pumping action in Secrets Of The Ghosts: The Sleeper then you are in fro a treat! DRAKEN is something rather different but your pulse is going to race just the same.

(Perhaps quiver is the better word)

This first installment of The Draglen Brothers Series  focuses on Draken the eldest son to a Royal Dragon Shifter family. He is Heir tot he throne and the head of the Corporations the Draglen family oversees here on earth.

They (all of the brothers to which there are nine) are all tall, dark and dangerously handsome. Each containing within them their beast, the dragon which is their other self. Their truer form. Although mankind has dismissed the dragon as myth and child's fancy anyone who looks into their unearthly eyes for too long feels their predatory nature.

The newest problem to their treasure hoarding existence is Princess
(Cess for short as even she sees the insanity of that first name.. LOL )
She is a well to do human who has managed to turn the usually composed Draken's head.

At meeting one even as he marches her off the property the yearning to devour each other begins to consume them both.

Cess tries to resist... (a futile attempt at best) she has school, a scientific career  a trip top Italy....
Draken too tries denying his urges, but in step his brothers who each call bullshit. They can sense and feel his desire for this girl. They make it their priority to get him what he really wants. Deciding her needs to get her out of his system, they'll only be around six months so what's the harm in some mind blowing sex.... Right???

The brother's manage to convince Cess to see Draken again. Apologizing for his being a total ass, and begging her to at least have a chat with him.
Well as you may have guessed, that conversation winds up going virtually as such....

(Nice Shoes.. wanna fuck?)
Okay not exactly but you get my point. Now that the two have sealed the deal, with Draken working her over until she can't stand, their need for one another grows stronger. What's worse for them is that Draken's mother, The Queen, has had a vision that if Draken keeps Cess as his Giver, he will fall in love and marry her, as that is their law. That to not do so will result in death. For one or both of them, that it would bring a war upon their house.

Draken denies his love, even as his mind and beast tell him to go back to Cess. He stands his ground with some very unhappy parents, but goes back to Cess, just the same. Swearing it's a dalliance.... They are not convinced... Frankly neither is Draken... He continues to remark that she will be his downfall.
Over all this is fast paced, and erotically charged, demanding that you turn the pages, the relationships between the brothers and Cess and her won twin,lead TO SOME TRULY GUT WRENCHING MOMENTS as well. Give it a look and see for yourself!

****
DRAKEN Teaser
“Hello, Cess,” Draken says, moving closer to me. I can’t move. He looks so sexy walking towards me. Everything south is wet. I feel like a fool. I can’t keep my eyes off him as he approaches me. He stands a foot away, just looking at me, gliding his purple eyes over my body. My breasts instantly harden when we make eye contact. We stare at each other without speaking. "I was invited,” I say, finding my voice.
“Oh, well I like entertainment also, Cess, besides, remember, you owe me something,” Draken says, coming closer. I feel the need to kiss him, like in my dream. I want him.
“I, I, umm, don’t owe you,” I say, feeling really hot now. I should go.
“You owe me, Cess, and I want a dance. I hear from my brothers you can dance. Now I want a private viewing of your… skills,” he says, not stopping the eye contact.
“Draken, I’m sorry for coming to your home, I will leave now,” I say, trying to get past him, but instantly I feel his hands on my waist, holding me in place.
“You will dance with my brothers, and not dance with me? Why? I’m not as handsome as they are?” he asks, looking into my eyes, searching. I see the other brothers are not leaving this time. It’s as if they are waiting for the answer to a question, more than just a dance.
“I thought you didn’t want me at your house, now you want a dance?” I say, frowning a little.
“You have such bravery about you, Cess. Yes, I want you to dance for me, and then I will dance for you; if you don’t like it, then you may leave,” Draken says, with a small smile. Yikes, I could climax with that look he just gave me. Please don’t let me go back on my promise.
******
Don't forget to check out my interview With Solease Here! And check her out at the Venues Below!!
Author Website   The Draglen Brothers Series  Secrets Of The Ghosts Trilogy
About me
Facebook
Twitter
Posted by S.I. Hayes at 4:14 PM