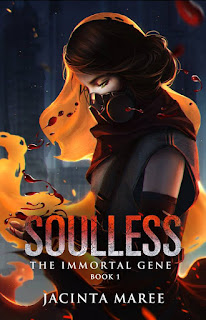 Welcome to Soulless.
We are the generation that laughs at death.

Reincarnation; what was once considered a gift of immortality has become an eternity of nightmares. Nadia Richards lives in a world plagued by reincarnation, a system of recycling souls where all past memories, personalities and traumatic events are relived daily in disjointed sequences. Trapped within their own warped realities, not even the richest and most powerful are saved from their own minds unraveling. Madness is the new human nature, and civilizations are crumpling beneath themselves trying to outrun it.  Within a society that ignores death, Nadia appears to be the one exception to the reincarnation trap. Born without any reincarnated memories and with printless eyes, the hot tempered 19 year old quickly becomes the ultimate prize to all those wishing to end the vicious cycle, or for some, to ensure they could evade death forever.

I'm intrigued... Let's turn the page shall we?

So it's the year 3228 and man has pretty much mucked it up as planned. Everything has gone to shit and it's a total police state. The Elite run things and the common folk are left to fend for themselves. About eleven life cycles ago people started remembering their previous lives with enough clarity that it had separated the masses and a drug known as D400 was created to help dampen the effects the memories were causing. Violence, madness, depression. Those who came from high classes they have made it so that they never lose their status, thus becoming forever richer and more powerful. Those who can not keep up have been left at the wayside.

Nadia Richards is unique. She does not possess the souls imprint, The marking everyone is born with which carries their past lives. This has caused no end of issue for her as she has grown up. Labeling her as a non-person time and again.

As the story unfolds Nadia's sister is tested time and again to see if she is one of the Blacklisted. Those whose memories cause them to go mad. While it is determined this is not the case, her triggered memories put Nadia ill at ease and send her out of sorts. When Annie wanders off resulting in Nadia's detainment because she reads as a possible Blacklisted the real trouble for her begins.

Taken to the Alpha prison she is  handed over to the deranged Dr. Fitzgerald who has bought her from her family, keeping her as a lab rat. His need to understand her use and reason for being a blank slate driving him to do unimaginably cruel things to the young Nadia.

But she had an option in all of it. Desil, a wonderfully mad inmate who has the means of her escape within his hands. The problem? She's trading one set of shackles for another, while she won't be getting tied up and chopped up by him, his uses for her remain unclear. Determined to not be experimented on further she tries to endure.

Desil takes the reigns and facilitates her escape anyhow. Now the pair are begrudgingly on the run together. They need each other if they are going to make it out of  the city. She doesn't want to be with him, but knows no other options. He seems to be in need of her but has yet to make those reasons clear. although he has ominously stated that he will always find her. In a tale about reincarnation that sits oddly.. don'cha think?

I'm gonna finish it now. So You should go and pick up this vividly written tale of interesting twists. 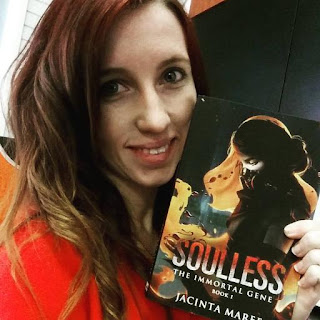 Born in Melbourne Australia, Jacinta Maree considers herself a chocoholic with an obsession with dragons and Japan. Published in 2012 to USA publisher Staccato Publishing, Jacinta writes a variety of genres from YA paranormal, steampunk, horror and fantasy. Winner of 2014 Horror of the year and best selling author, Jacinta writes to answer all of her absurd questions and to explore themes and characters not often seen in main media.